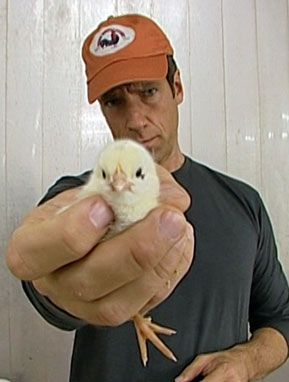 Have you ever seen the show Dirty Jobs with Mike Rowe? I love Mike. He’s real and authentic. He is also always ready to roll up his sleeves and go to work; no matter how messy the job.

Several years ago, I was onsite with a client in Gainesville, Georgia. My client’s production manager handed me a flyer and asked me if I’d be interested in joining their foursome the next day.

Without even looking at the flyer I naturally assumed he meant golf. “Sorry. But thanks for the invite. I’m here to work and can’t take time off for golf. Maybe next time.” I graciously responded.

He just jokingly chucked as he pointed to the flyer. I took a moment to look at it and realized it had nothing to do with golf.

It was a flyer promoting a chick sexing competition.

Now in the interest of time I won’t get into the details of what chick sexing is. You can either use your imagination or check out this link.
Mike Rowe did an episode where he was chick sexing. It’s a dirty job.

Another dirty job is management.

After 17 years of working with small and evolving businesses I have found that very few organizations are engaged in effective management work. They often have people with manager titles. But they were not really doing management work.

The idea of management simply doesn’t sound sexy. Most people want to talk about leadership, marketing and sales. You know…the sexy stuff.
We don’t really understand it, so we avoid it or we delegate the task to someone else who doesn’t understand it or do it well either.

The other night it was out to dinner with a new client and his key manager, Janet. During our conversation, Janet declared, “We have a good business but something is missing. We just can’t seem to get over the hump.”

I asked her to describe the work she does every day. I already knew that the owner was doing a fair job of leading and was engaging in revenue production work. The owner wasn’t really engaged in management work.  I often find that most business owners don’t want to do it. And quite frankly, they shouldn’t. They should be leading, casting vision, seeking new business growth and development opportunities and focusing on innovation. Other than working with the key people who report to them directly, they ought not be engaged in day to day management activities.

But when Janet described her day to day work, absolutely nothing about it suggested she was doing management work.

At least not effective management work. She has the title. But wasn’t doing the work of a manager.

Janet, having accepted the position or job title seemed willing to take on the responsibility. The reality was that she just doesn’t know what constitutes effective management work. So, like many others in her position, they gravity to the tactical work they feel most comfortable doing.

I explained it to Janet and my client that the reason they aren’t getting over the hump is because of a lack of good management. When I explained what constitutes effective management work and that a manager’s job is to focus entirely on activities designed to maximize department and team member performance. In other words, creating an environment where their people are wildly successful. This includes system development, training and employee mentoring.

When I share this my client and Janet looked at each other and in unison said, “That’s what’s missing”.

But for some it feels like dirty work because it requires dealing with people, their issues and challenges. It suggests micromanaging and keeping people accountable too. Managing and monitoring employee performance and their issues is tough work especially if we don’t have a strategy, system and plan for doing it.

Chick sexing can be messy and downright disgusting. If your timing or execution is off, you might get a mouthful of poop. If we don’t do management work well either, sometime we eat crow.